The Corpernicus Atmosphere Monitoring Service (CAMS) closely monitored the intensity of the Australian bushfires from the early start of the bushfire season until early-January 2020. In their service roll of providing consistent and quality-controlled information related to air pollution and health, they forecast the resulting transport of pollutants.

Below is an article, published 6 January 2020, published on their website, looking at the impact of pollutants from the Australian fires.

Since fires flared up in the states of New South Wales and Queensland in September 2019, parts of Australia have continued to battle unprecedented levels of wildfire activity, even though the annual fire season in the south-east of the country doesn’t typically peak until January–February. The Copernicus Atmosphere Monitoring Service (CAMS*) has been closely monitoring the intensity of the fires and forecasting the resulting transport of the pollutants they release. 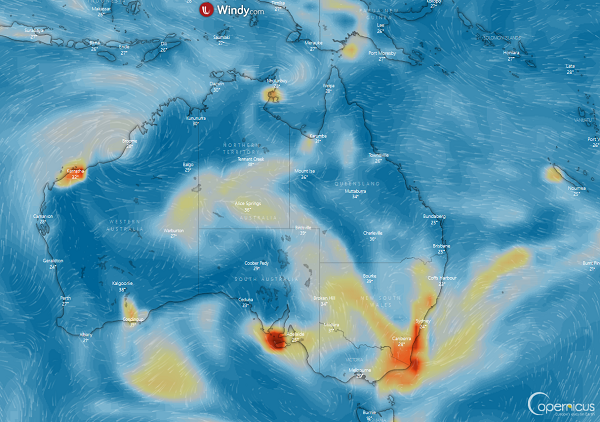 Apart from in the state of New South Wales, where unusually fierce fires have been raging for months, fire activity in Australia was overall relatively low in the country’s spring months of September to November 2019 compared to the same period in the years 2003–2018.

However, CAMS information on fire radiative power – an indicator of fire intensity – shows that for most days in December fire activity across the country was many times higher than the average for the previous 16 years. As of 3 January, almost six million hectares of land had been burned, equivalent to an area larger than Croatia.

Eastern Australia – a region that doesn’t typically see as much fire activity – is now battling the most extreme fires. On 30 December, fires suddenly flared up in Victoria, where almost a million hectares have now been burned. The neighbouring state of New South Wales has been experiencing abnormally high levels of activity since early September, but in response to expected increased danger due to high temperatures and strong winds last week, on 2 January the state declared a week-long state of emergency.

In addition to destroying land and infrastructure, wildfires also have a huge impact on air quality. CAMS has continued to forecast the transport of the smoke they emit, which covered an estimated area of 20 million square kilometres this weekend, or enough to blanket all of Russia and still have some to spare to cover a third of Europe. The service has predicted and subsequently observed smoke to blow in many different directions over the last couple of months – including back over Australia itself – with the pollutant now severely affecting New Zealand. Many people in the smaller country are choosing to remain indoors to protect themselves from the smoke, which has also turned glaciers brown, possibly leading to them melting more quickly. CAMS forecasts that whilst most smoke is now travelling north of New Zealand, some will continue to affect the country during the days ahead.

The fires have already released approximately 400 megatonnes of carbon dioxide into the atmosphere. On 2 January CAMS saw that the highest concentrations of atmospheric carbon monoxide in the world were over the ‘clean’ South Pacific Ocean, having come from fires in New South Wales. Taking Australia as a whole, carbon dioxide emission hasn’t been particularly high this wildfire season, but emissions from New South Wales are many times higher than the 2003–2018 average.

A comparison of total carbon dioxide released by wildfires in Australia between 1 September and 6 January for the past 17 years, compared to emissions in New South Wales. (Credit: Copernicus Atmosphere Monitoring Service/ECMWF)

The current intense fire season is linked to dry and hot conditions enabling fires to spread quickly. In September 2019, a rare sudden warming of the stratosphere occurred over Antarctica that caused the 2019 ozone hole to behave very strangely. The event also resulted in hot and dry winds across Australia during Autumn 2019, promoting favourable conditions for widespread wildfires. Furthermore, rainfall across most of the continent was well below average throughout 2019, contributing to very dry soils and vegetation. 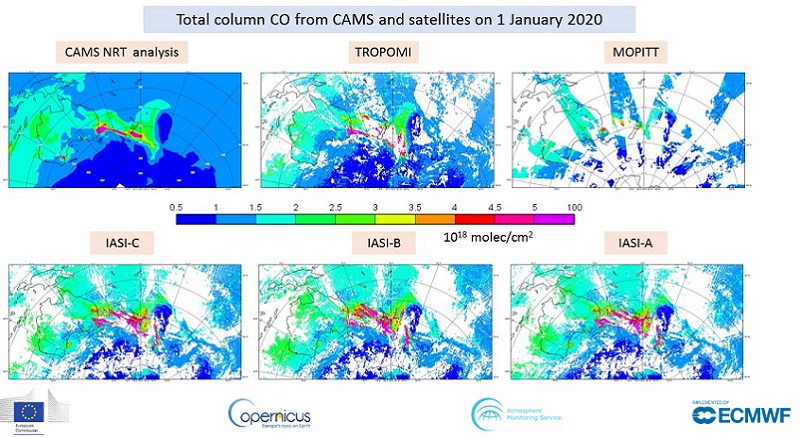 CAMS provides daily estimates of fire emissions around the world through its Global Fire Assimilation System (GFAS), which combines satellite observations of fires with computer models. The resulting information can be used to inform scientists, policymakers, and the general public via a range of services, including via applications such as Windy.

For more information on CAMS’ monitoring of the Australian wildfires, see our previous article published on 14 November.

*CAMS is implemented by the European Centre for Medium-Range Weather Forecasts on behalf of the EU.