Click here to read the full article, or continue reading below: 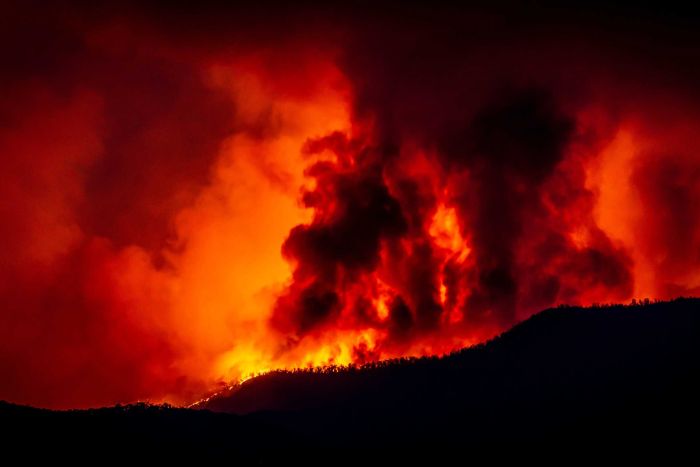 Can numbers help give us a sense of the unprecedented scale of this fire season? (Supplied: Markus Dirnberger)

Many Australians just lost their summer, thanks to the recent bushfire crisis.

To convey a sense of the unprecedented scale of the disaster much of the reporting focused on numbers, but where did these figures come from?

Here, we take a close-up look at five of these numbers: where they come from, and whether they’re for real. 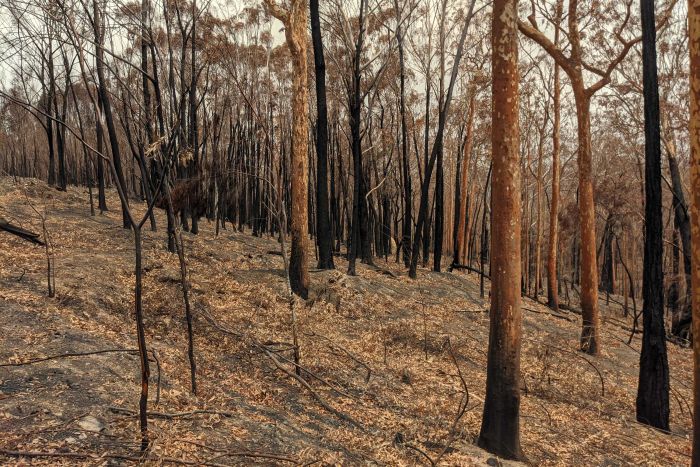 The most obvious way to communicate the scale of a fire disaster — and compare it to other fires — is by focusing on the area of land the fire that has burned.

According to the Department of Home Affairs, to date more than 12.6 million hectares across Australia have been burned.

To put that in some perspective, in New South Wales alone more than 5.4 million hectares have been burned, said Ben Shepherd from the NSW Rural Fire Service.

“So it has been extraordinary, it has been unprecedented, and hopefully it’s one that none of us here will ever have to experience again.”

The RFS, and other fire services around the country, make super accurate maps of the fires they are fighting.

“That’s done for a number of reasons, obviously — yes, to give us a historical figure of how much area is lost, but also that information, once it is mapped, goes into our systems here and allows us to better manage fires,” Inspector Shepherd said.

Depending on the size of the fire this mapping can be done by the firefighters on the ground, observers in helicopters, or by heat-sensing aircraft that take a thermal image of the fire at a particular point in time.

That collected data then all gets sent back to the RFS headquarters, and from there it is shared far and wide.

“Whatever you can see on the Fires Near Me site is what we’re looking at here,” Inspector Shepherd said.

All the information collected about a fire is used to check, double check and triple check that the fire map is as accurate as possible. Because if a fire’s coming your way, these maps may be used to make what can be life or death decisions. 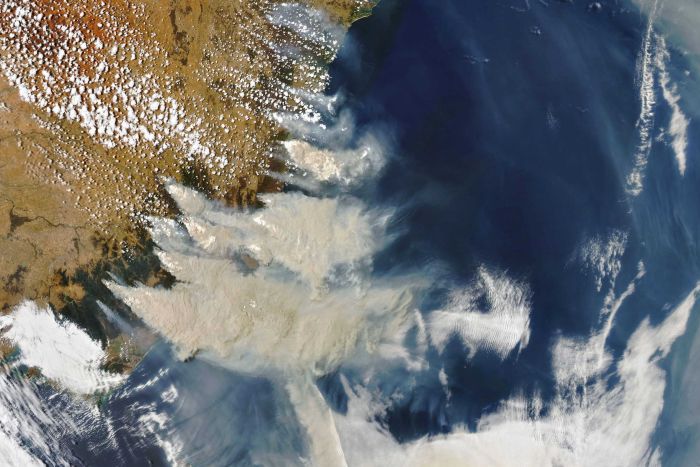 From the beginning of September 2019 to February 23, 2020, the Australian bushfires emitted 434 million tonnes of carbon dioxide into the atmosphere.

This equated to over three-quarters of the 532 million tonnes Australian industry emitted in 2018-19.

That number has been calculated by senior scientist Mark Parrington from the Copernicus Atmosphere Monitoring Service (CAMS) in England, which is the European Union’s Earth Observation Program.

It uses a network of satellites called the Sentinels, which among other things, tracks all varieties of air pollution.

“From those observations of active fires, we can estimate the emissions and we can feed them into our air pollution forecasting.”

On the satellites, NASA sensors called MODIS (which stands for Moderate Resolution Imaging Spectroradiometer) looks for heat sources on the Earth’s surface with a much higher temperature than the surrounding land.

To calculate bushfire intensity, you remove extraneous heat sources, like volcanoes and gas flares, and you’re left with a measurement called the ‘fire radiative power’.

“There’s been a lot of work in the scientific literature in the past which have found relationships between the fire radiative power and how much … vegetation is consumed by a fire,” Dr Parrington said.

“You then estimate how much carbon dioxide or the carbon gases, particulate matter and all the other pollutants related to fire are emitted.”

Amazingly, for Australia as a whole, it hasn’t been a record year fire activity-wise, Dr Parrington said.

But the New South Wales and Victorian fires in late December and early January emitted several times more carbon dioxide than the totals estimated for all the other years that CAMS has on record. 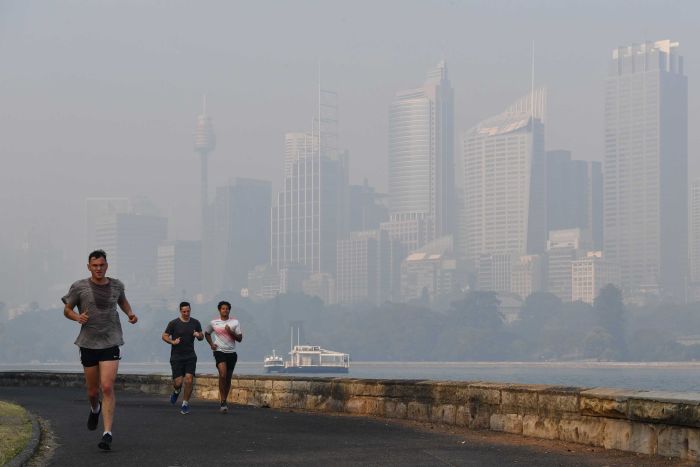 Smoke and hazardous air quality has affected many people living on the east coast of Australia. (AAP: Dean Lewins)

Another bushfire pollutant has, arguably, had a more immediate and visceral impact on many people living up and down the east coast of Australia.

“Obviously one of the big differences with this fire season is the number of large and medium-sized cities and regional towns which had multiple days of hazardous air quality,” said economist Nicholas Biddle.

The poll is based on interviews with a representative sample of 3249 Australian adults, whose responses could then be extrapolated to give estimates for the whole adult population.

The effects of the smoke would have varied in severity.

“So you would have some people who had to close the doors, to people who would have been hospitalised due to the very hazardous smoke levels,” Professor Biddle said.

10.6 million Australians worried about their and others’ safety 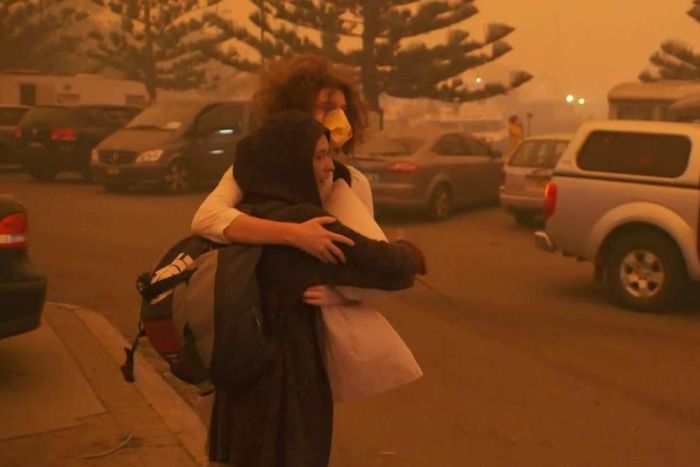 Australians were more likely to be worried over concern for others’ safety than their own. (ABC News)

The ANU poll also estimated that 10.6 million, or over half of Australian adults, were anxious or worried for the safety of themselves, their close family or their friends, due to the bushfire crisis.

Professor Biddle said people were more likely to be worried or anxious when a family member or friend — rather than themselves — was being threatened by fire.

“That makes sense because it’s that uncertainty, and not knowing what’s occurring or what’s likely to happen.”

The poll also found that people worried about themselves, friends or family were also more likely to have been exposed to other fire impacts.

These included having friends or family whose property was either threatened or damaged, having their own property threatened, being advised to evacuate, having their travel or holiday plans affected; or being exposed to smoke. 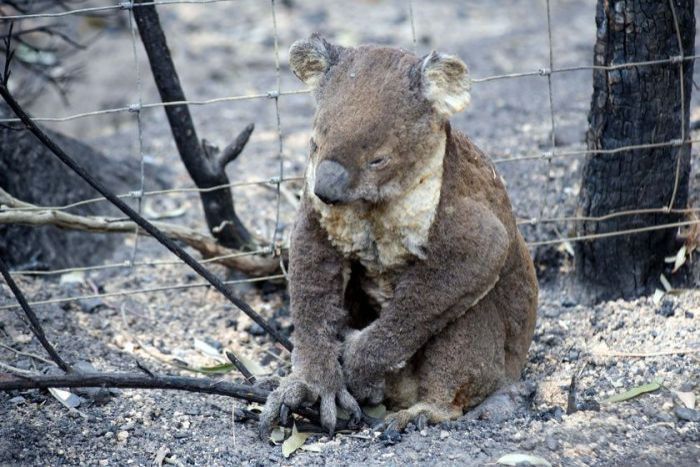 It’s estimated that 1 billion animals have been killed in the fires, but the real number is likely to be far higher. (Supplied: M Fillinger)

One of the most sobering numbers is that 33 people died in this summer’s bushfire crisis.

But next to this loss of human life, perhaps the most emotionally impactful statistic is that over 1 billion animals were killed in the fires, according to ecologist Chris Dickman of the University of Sydney.

To come up with that number Professor Dickman and his colleagues looked at the published scientific literature and any other data they could find, to estimate the average density of different groups of mammals, birds and reptiles in New South Wales.

They then multiplied these estimates by the area burned to get the number of animals affected.

“The first time I did that when 3 million hectares of forest and woodland estate had burned, the number came out to around 480 million,” Professor Dickman said.

“With the fire extent spreading by the end of December, early January, the figure went up to 800 million for New South Wales alone.”

With parts of East Gippsland also on fire, Professor Dickman and his colleagues thought it was reasonable to extrapolate the densities from New South Wales into the adjacent Victorian habitats.

“If you do that, you end up with an area burned of about 6.25 million hectares, which equates to over 1 billion animals in the path of the fires,” he said.

But this number is clearly an underestimate, Professor Dickman added, because we know that across Australia more than 12.6 million hectares has been burned.

The estimate includes birds, reptiles and terrestrial mammals, but doesn’t include bats, frogs or fish because there weren’t any density estimates available for them.

“Then if you expand it to include invertebrates … as many as 240 billion have been incinerated by the fires in just New South Wales and Victoria alone,” Professor Dickman said.

“So, yes, a billion sounds a big number, but it’s a very conservative one.”