Australia’s national science research agency, CSIRO published an online article and factsheet explaining the Australia 2019-2020 bushfires. You can read the article below and download the factsheet here.

The bushfires experienced in the 2019-20 season have so far burned more than 10 million hectares of land in southern Australia, greater than the combined area burned in the Black Saturday 2009 and Ash Wednesday 1983 bushfires.

But what causes these bushfires and why has this bushfire season been so significant? The CSIRO has been undertaking bushfire research for almost 70 years. This factsheet, with advice from other specialist organisations, provides some insights.

Bushfires are a natural part of the Australian landscape. Many of our plants need bushfires to regenerate, and many have adapted to the harsh conditions our climate delivers. With such a vast country, just as the landscape changes from place to place, so too does the bushfire risk and the timing of the bushfire seasons. 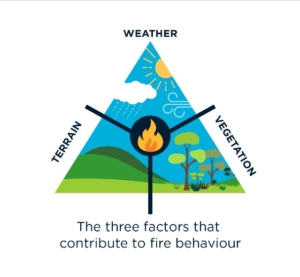 Bushfires are the result of a combination of weather and vegetation (which acts as a fuel for the fire), together with a way for the fire to begin – most commonly due to a lightning strike and sometimes human-influences (mostly accidental such as the use of machinery which produces a spark). Depending on weather conditions, embers can be transported by wind from one location to another, causing new fires or spotting.

When they are large enough, bushfires can generate local weather impacts such as lightning, tornadoes and fire-storms which, in turn, can impact on fire behaviour.The terrain of an area (or the landscape) contributes to the spread and management of a bushfire. Fires burn faster uphill and can build in intensity and speed. Fires that start in remote, rough or hilly terrain can be difficult to fight.

These factors of weather, vegetation and terrain vary widely across Australia due to its large size and distinct regional climates, requiring different fire management and firefighting techniques.

Why has this fire season been so significant?

Of the three factors that contribute to fire behaviour, two have played a major role in this bushfire season for the eastern and southern states of Australia: weather and vegetation.

Weather relates to conditions over short periods of time. The risk of bushfires starting or advancing out of control is highest when there is ‘fire weather’ – a combination of strong winds, low humidity and high temperatures. In 2019, southern and eastern Australia experienced record low rainfall and record high temperatures which have contributed to increased frequency of fire weather days.

Vegetation including trees, grasses, bushes and leaves act as fuel for a bushfire. The more abundant and drier the fuel, the more intense the fire will burn. Nationally-averaged rainfall was 40 per cent below average for the year, making 2019 Australia’s driest year since records began in 1900. Many parts of southern and eastern Australia are in drought and have been for multiple years which can impact both the rate of vegetation growth and its dryness. Fuel management including hazard reduction burns can reduce likelihood of ignition and initial rates of spread in high risk areas if carried out in an appropriately targeted manner. 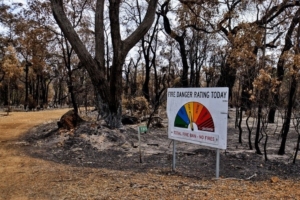 Australians are familiar with the Forest Fire Danger Index (FFDI) sign on roadsides across the country that show the level of fire danger on a given day. The index combines a measure of vegetation dryness with the weather factors characterising ‘fire weather’ – air temperature, wind speed and humidity. If you add up the FFDI values for every day over a year, you get what’s called the ‘annual accumulated FFDI’.

The role of climate change

Climate change doesn’t cause fires directly but has caused an increase in the occurrence of extreme fire weather and in the length of the fire season across large parts of Australia since the 1950s. In addition to 2019 being the driest year since records began in 1900, it was Australia’s warmest year. In 2019 the annual mean temperature was 1.52 °C above average1.

The impact of climate change has led to longer, more intense fire seasons and an increase in the average number of elevated fire weather days, as measured by the Forest Fire Danger Index (FFDI). Last year saw the highest annual accumulated FFDI on record.

Living with bushfires and the role of science

Despite the fact that bushfires are a natural part of life in Australia, each season, preparing for and managing bushfires is critical to minimise the risk and potential damage of bushfires. Fire prevention measures include:

In the medium to longer term, where and the way we live and organise our communities, and how and where we build our houses also play an important part in how we prepare and respond to bushfire threats.

Our national science effort remains focussed on providing the information necessary to improve our overall bushfire understanding and preparation.

Australian researchers produce some of the world’s best climate, weather, fire and disaster research; and work closely with operational agencies, governments and communities to better prepare for, respond and recover from these events.

CSIRO will also provide recommendations to Australian Governments on how we can better prepare for and manage bushfires when they occur, including new tools driven by science and technology.