How the 2019 Australian bushfire season compares to other fire disasters

Charis Chang, Senior Journalist at news.com.au looks at the shocking size of the Australian bushfires during the 2019-2020 fire season:

The massive bushfires sweeping across the country have shocked Australians in their size and ferociousness.

Since the start of the 2019 fire season, a staggering 10 million hectares has been burned, with all states and territories impacted except the ACT.

To put this into perspective, in NSW alone, almost 5 million hectares have been burned, which covers an area larger than the Netherlands.

In total, the area burned is almost the size of England, which is 13 million hectares.

Australia’s mega fires have also left others in the shade. The Amazon fires, which left the world reeling in August last year, saw about 900,000 hectares burned.

Emeritus Professor Stephen J Pyne of Arizona State University is an expert on the history of fire as well as a former firefighter in the US, and has written a book about Australia called Burning Bush: A Fire History of Australia.

He said most of the great historical bushfires in Australia had been named after the days they happened, such as Black Saturday. Each of them were memorable due to a number of factors including how destructive they were and how many people died.

The 2009 Black Saturday fires claimed the most lives, with 173 people. But the most destructive event, which happened in 1974 and burned 117 million hectares, does not have a name because most of the land was in central Australia and so it did not impact many communities.

“The 1974/75 fires had almost no impact and much of the damage was found by satellite after the fact,” Prof Pyne told news.com.au.

While some have pointed out that Australia has always experienced bushfires, Prof Pyne said these massive, destructive fires appeared to be occurring more frequently in the last 20 years or so.

“Undoubtedly climate change is real and my sense is that it’s acting as a performance enhancer,” he said.

“Fires are becoming more and more savage, and they are more frequent. They used to happen every 30 or 50 years, now they seem to be happening by the decade.”

When it comes to the current fires, Prof Pyne can only go off the media reports about their ferocity, but he said what was interesting about them was how long they had been burning.

“It sort of seems to be these endless fires, forever fires, that are going on and on.”

He said historically January and February were the “blow out months” when large fires were more likely but these fires had started early, with some burning since October, and would likely continue.

“There are predictions it probably won’t rain for another two months so there is nothing to stop these things, unless they run out of fuel,” he said.

Prof Pyne said Australia and other countries around the world would need to reconsider how they approached fire management as it was impossible for firefighters to 100 per cent control these large, intense fires.

“We’ve got to find another way to keep these communities from burning. Getting more air tankers or fire engines is not going to solve it,” he said.

He said a broader view would need to be taken, including reconsidering what materials homes were made of as well as the reduction of ignition sources like power lines, which were a factor in the Black Saturday fires.

To put the damage into perspective here are some of Australia’s most destructive fires.

These fires are ongoing and have been raging since October 2019, with several horror days including New Year’s Eve and giant blazes in the lead-up to Christmas.

One of the most recent fires in Australia’s history has also been the country’s worst in terms of lives lost. About 400 fires raged across Victoria, affecting 78 communities on February 7.

According to the Australian Institute for Disaster Resilience, in the two weeks prior, there had been a severe heatwave in the state with temperatures in Melbourne rising higher than 43C for three consecutive days. The state had also been dealing with a long term drought and this combined with extreme fire conditions on February 7 when Melbourne reached 46C.

Wind gusts of more than 100km per hour also changed direction late in the day and caused unpredictable fire paths.

More than 3000 homes and other buildings were destroyed and more than 11,800 livestock died.

About 70 per cent of the ACT’s pasture, forests and nature parks including Namadgi National Park, Tidbinbilla Nature Reserve and all government pine forest west of the Murrumbidgee River Stromlo pine plantation was burned. There were approximately 488 houses destroyed and many more were damaged.

More than 100 fires burned through parts of NSW and the ACT for about 23 days starting on December 24.

The fire danger was increased by temperatures up to 45C in some areas, winds of 90km per hour and also very low humidity.

The fires began in the Cessnock, Blue Mountains, Hawkesbury and Penrith areas.

A drought lasting 10 months had dried out eastern Australian forests prior to the fires on February 16. Added to this were heatwave conditions, low humidity and gale-force winds.

Temperatures hovered between the high-30s to mid-40s.

Thousands of houses and buildings were destroyed, and 32,400 livestock was lost in Victoria. 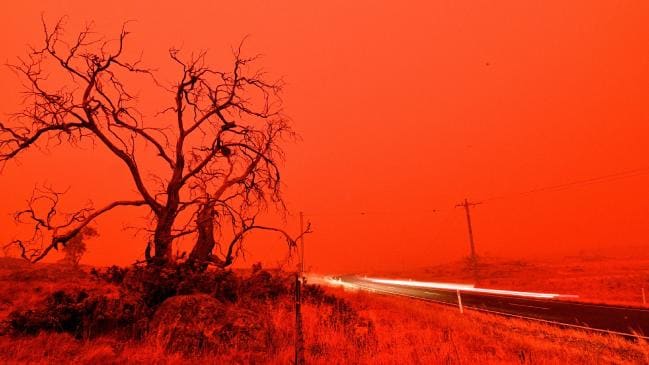 A long exposure picture shows a car commuting on a road as the sky turns red from smoke of the Snowy Valley bushfire on the outskirts of Cooma on Saturday. Picture: Saeed Khan / AFPSource:AFP

During the summer between 1974 and 1975, Australia experienced its worst bushfire season in 30 years.

New South Wales was badly affected with widespread damage to infrastructure, including communications, roads, railways and property fencing. Farmers lost crops and livestock. The areas affected included those in the western part of the state in Cobar Shire, Balranald, Glendale and regions around the Lower Hunter. The overall damage cost was estimated at approximately $5 million.

About 110 separate fires ravaged southern Tasmania on February 7. They were fanned by a high amount of forest litter, northerly winds of up to 110 kilometres per hour, and extremely hot air. The fires came within two kilometres of the central business district of Hobart.

These fires devastated the Mount Lofty Ranges, east of Adelaide, on January 2. By 1pm, the temperature reached 43C in Adelaide and there were wind gusts of 100km per hour.

The culmination of several years of drought in Victoria, January 13, also known as Black Friday, saw high temperatures and strong winds fan several fires, some which had been burning since early December, into a massive fire front.

The fires were made worse when some bushmen and graziers lit extra fires to try and protect themselves but these got out of control and spread. 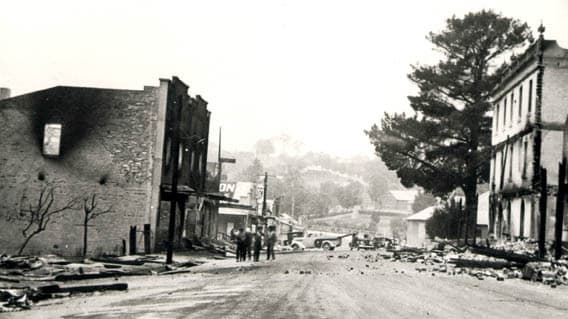 Throughout February and March, bushfires raged across large areas of Gippsland in Victoria and there was widespread destruction to farms, houses and sawmills. The fires reached their peak on February 14 when 31 people died at Warburton near Melbourne. Widespread fires also occurred across NSW, ACT and Queensland.

The southern Gippsland area of Victoria was burned on February 1 including Cranbourne, Traralgon, Neerim South and Poowong areas.

Damage: 5 million hectares burned, about a quarter of the state of Victoria.

Fires had been burning for a number of weeks but culminated on February 6 when temperatures reached 47C in the shade at 11am in Melbourne. The fires raged out of control from Barwon Heads, all the way to Mount Gambier in South Australia. Smoke haze travelled as far as Tasmania.